Excelling in the fields of Stevedoring & Mining, Ready to Conquer Oil & Gas! 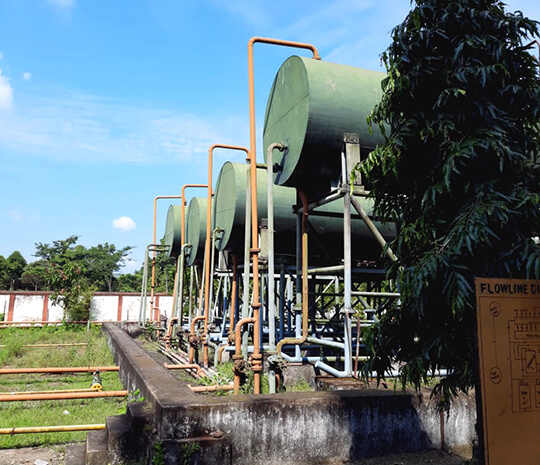 Orissa Stevedores Limited dived into the Oil and Gas industry in the year 2019 and is now a leading operating company in the upstream hydrocarbon sector of the Country. After a successful participation in seismic data acquisition & processing tender floated by Oil India Limited, we have been unstoppable. With our corporate office in Noida, we are now establishing two operational fields setup in the state of Assam. Our confidence supported by the industrial expertise of the team has made our ambitions limitless in this venture.

Since this journey began, we have participated in bidding for four clusters of Oil and Gas producing fields offered under Production Enhancement Contract regime (PEC) by ONGC & Oil India Limited. Our success in the PEC tender has already catapulted us into the league of operating companies in the upstream hydrocarbon sector of the country.

Our journey towards exploration and production had taken a major leap with our participation in the offer of producing oil & gas fields by the National Oil Companies (ONGC & OIL) in June 2019 ... under Production Enhancement Contract regime and accessing two contract areas (5 fields) of ONGC in May 2020 via competitive bidding process. We aspire to further expand our presence through acquiring E&P assets and providing E&P services to other operators.

OSL is of a strong will to strengthen & expands its capabilities to the maximum. We are looking forward to joining hands in acquiring participating interest in discovering and producing oil and ... gas fields. We are on an active lookout for evaluating potential for acquiring exploration acreages. OSL believes in strategic partnership with technology providers for gas monetisation. We aim to provide the best of exploration and production services to oil and gas companies & develop strategy by collaborating with cutting edge technology partners and acquiring essential resources. OSL is determined to deliver need based effective solutions to E&P players. We have already made noticeable progress in developing E&P services in the following three segments: 1. Seismic Acquisition, Processing and Interpretation 2. G&G and Engineering Evaluation 3. Oil & Gas field services – drilling, completion, production etc.

OSL is ready to match the pace of the nation and turn India’s dream of being a gas-based economy into a reality. We are highly motivated about augmenting the infrastructure in LNG & CGD ... domains to meet national requirements. OSL also plans to venture into technology domains to facilitate monetising the isolated non-commercial gas production, including from our own operational fields.

Our goal towards being a trusted technology-driven Oil & Gas company in Upstream, Midstream & Downstream segments of the business has already taken form. 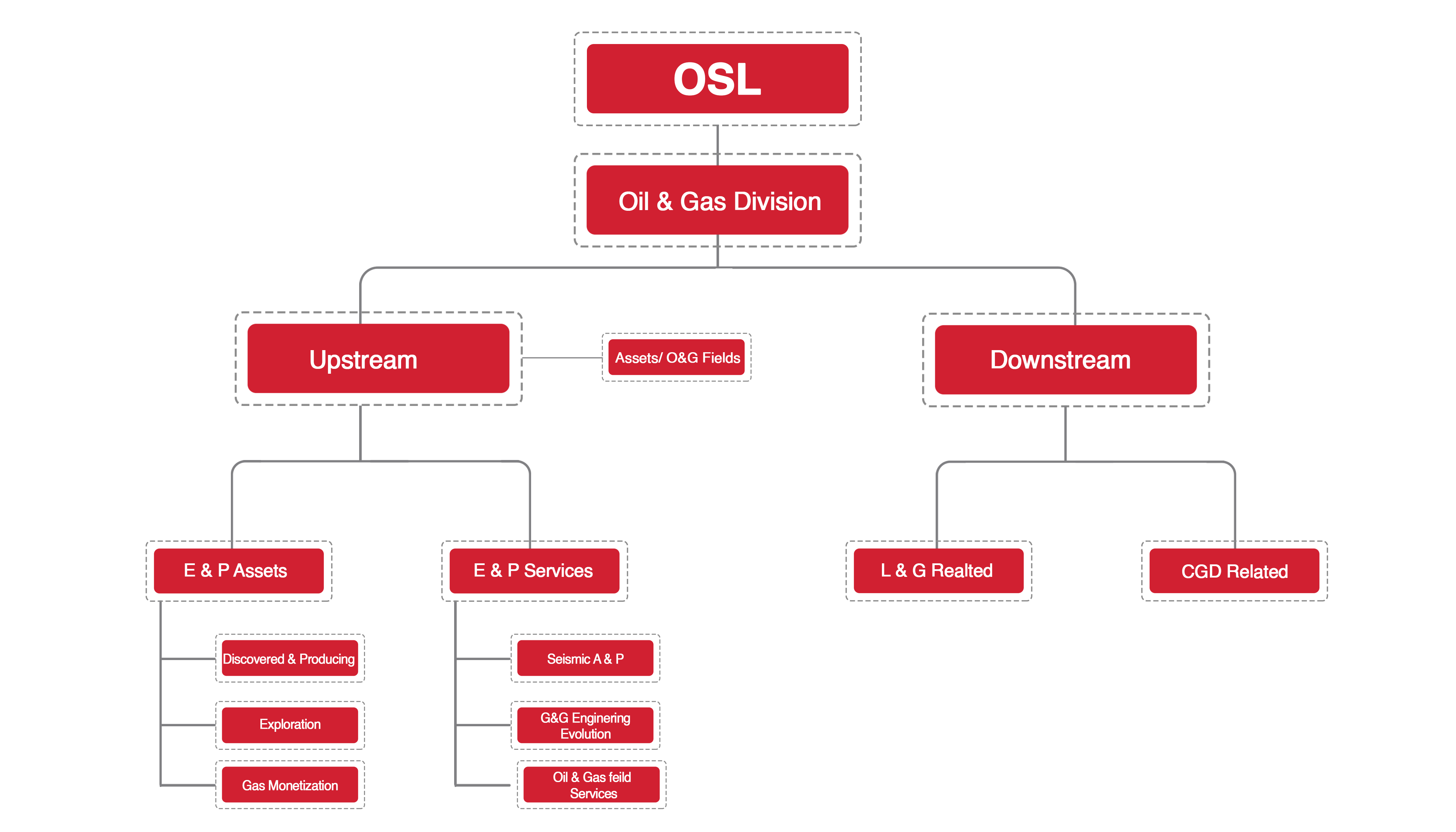 Following our founder’s vision, we plan to touch new heights and redefine industrial credibility in the field of Oil & Gas. Starting from Odisha, we are set on building a national presence to ultimately pursue our global aspirations.

ONGC and OIL announced an offer of 64 and 2 fields respectively under Production Enhancement Operations (PEO) through International Competitive Bidding in June 2019 with the objective to augment domestic production of crude oil and natural gas from the marginal nomination fields.
Read More

With the objective to achieve the committed enhanced oil production to ONGC, most of the intervention programmes shall have to be undertaken in the first couple of years from Asset transfer (Dec 2020) followed by new well drilling.
Read More

OSL has strong aspiration to enter in E&P service sector and exploring the various models to collaborate with technology service providers. Any willing National or International company shall be welcome to join hands with OSL for participating in the following services.
Read More

The Journey Has Begun

Our progress in the past year reflects  our sheer will and determination. As a response to our expertise, OSL was awarded two contract areas of Nambar and Chanmaigaon through International Competitive Bidding  in June 2019 under Production Enhancement Operations (PEO) by ONGC and Oil India Ltd.

Located in Sivasagar & Golaghat districts in Assam, Nambar contract area comprises two fields namely Nambar and East Lakhibari and is a part of Jorhat Asset of ONGC. The area is situated to the South-West of Jorhat town. ‘Nambar oil field’ and ‘East Lakhibari field’ were discovered & started producing in 1999 and 2003 respectively. Cumulative production from the cluster as on 01.04.2019 was 0.45 MMt of oil and 138 MMm3 of gas.

Changmai Gaon is one of the oldest discoveries made in 1984 where commercial production began in 1991 through the first well. The contract area comprises three fields namely, Changmaigaon, Disangmukh and Panidihing located in Upper Assam Shelf set up and is a part of Assam asset of ONGC. Panidihing and Disangmukh are relatively recent discoveries, where commercial production commenced in 2003 and 2007 respectively. Cumulative oil production from the cluster as on 01.04.2019 stands at 0.80 MMt. The cluster is currently producing oil at @ 25-30 m3/de. We have further identified production enhancement opportunities for the cluster, through drilling of infill wells, work-over jobs, facility optimisation and fit for purpose technology application.

We boast of one of the most experienced teams whose only goal is to take OSL Oil & Gas to the zenith of the industry. The diversified experience our leaders bring to the table is the fuel that makes OSL Oil & Gas reach for the sky.

The founder-member of OSL Oil & Gas, Mr. Sudhakar Mahapatra has unmatched expertise in various facets of  petroleum exploration, development, and management.... Along with 39 years of industry experience, he brings in academic rigour to the business as he is a member of Kalinga International Foundation (a think tank) in India and also a member of the Research Council of National Geophysical Research Institute (NGRI), India.

Our Executive Director of Exploration & Development, Mr. Pawan Kumar brings to the company  his 37 years of experience in various fields of oil/gas upstream industry. He has previously ... played a crucial role in the discovery .of Periyakudi, North-Kovilkalappal, Kesavadasupalem and Adichapuram oil fields in Cauvery & K.G. Basin and Dayalpur oil field in A&AA Basin.

Our Executive Director of Production & Services, Mr. A. M. Mamen holds a degree in Mechanical Engineering from University of Kerala. With more than 35 years of experience in the ... upstream oil & gas industry, his understanding of the upstream E&P vertical is par excellence.

Shri. Ghana Gogoi assumed the responsibility of Resident Chief Asset in OSL from October 2020. Prior to joining OSL, Shri. Gogoi worked in the NOC - Oil India Limited for more than 36 ... years. He holds a degree in Mechanical Engineering from University of Dibrugarh. He has varied experience in upstream onshore & offshore drilling discipline like vertical, horizontal, multi-lateral, whisp stock, well design and AFE. He has been exposed to national and international operations under different contract regime while serving PSU and private E&P players. During his career, he has successfully executed Deepwater drilling projects, benchmarking drilling commercial and rig cycle time. With more than 36 years’ experience in upstream oil & gas industry he possess good understanding of whole upstream E&P vertical.

A Peek into the World of OSL

Select one of our representatives below to chat on WhatsApp.